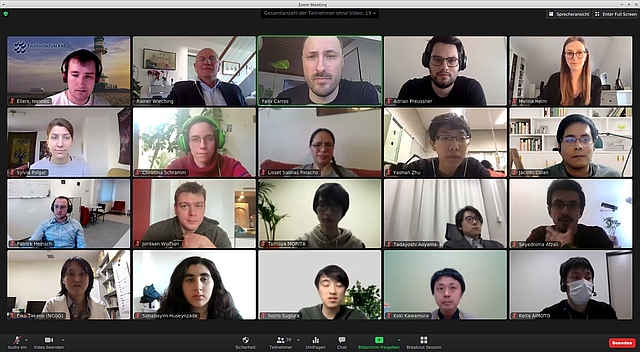 Around 30 international researchers and practitioners working in four teams participated in the second PADERO (Participatory Design in Robotics for Elderly Care in Germany and Japan) hackathon and ideas competition. They developed a multitude of ideas and four specific approaches, ranging from robot assistants for activities of daily living (ADL) to robot chef cooks, all of them intended to support elderly people in need of care.

Besides the technical difficulties of virtual teamwork between Europe and Japan across an eight-hour time difference, the required participatory design of the PADERO project presented the project members with another challenge. The technical solutions had to be realistic and meet the actual needs of everyone involved – primarily nursing home residents, but also their relatives and nursing staff as well as the robot assistant programmers and engineers.

On the last day of the developer and idea competition, which was held virtually on 11 and 12 February via ZOOM and MIRO, the teams presented their approaches and also discussed important aspects of topics such as data protection or privacy, ethics, safety and technical robustness as well as fulfilment of end-user needs.

The judges and international experts of the hackathon rated the results of the virtual event, which was organised by the German University of Siegen and Kiel University of Applied Sciences in collaboration with the Japanese National Center for Gerontology and Geriatrics (NCGG) as well as the Nagoya University and Meijo University in Nagoya, Japan, as ground-breaking.

Another hackathon is scheduled for spring 2021.

Around 30 international researchers and practitioners working in four teams participated in the second PADERO (Participatory Design in Robotics for Elderly Care) hackathon and developed four specific approaches which were evaluated and awarded prizes by an international jury.

A Human Support Robot (HSR) assists the elderly nursing home residents in standing up and performing some light exercises and joins them for a walk while sharing its location with the nursing staff for emergency purposes. The robot also detects falls and escorts the elderly to the toilet, or simply calls for help. If an elderly person needs assistance for Activities of Daily Living (ADLs, e.g. toileting), the robot can also provide support. When and where necessary, the robot respects the person’s privacy. The robot is not meant to replace nursing staff but will be a helping assistant.

“Such robot support for ADLs ideally matches the real needs of the elderly in their daily lives and should therefore have a very high impact on our ageing society.” (Alexandre Mazel, Innovation Director at Softbank Robotics Europe)

This model is based on a Toyota HSR which is combined with a cooking game.

Many people with advanced dementia enjoy cooking but lack the required memory capacity and energy. The Remote Chef Cook is an HSR robot which the patient connects to using a tablet and a Wi-Fi connection. Together with a relative or a caregiver, the patient can now select their favourite recipe and a preparatory activity such as peeling potatoes or cutting carrots. The full range of communication, including animations and sound, is fun and engaging and allows the elderly to socialise and to learn. It also promotes a healthy diet, lower blood pressure, memory training and the use of hand gestures. It also helps to slow the progression of dementia. Dementia patients who are isolated or have limited mobility can also use the Remote Chef Cook.

“The participation effect makes it a very interesting solution, but we must keep an eye on the costs of the robot and all the technology involved so that they do not overextend dementia patients or amount to a socioeconomic burden.” (Professor Jens Lüssem from Kiel University of Applied Sciences, Germany)

Drones can help elderly patients with gait disorder to achieve an upright walk, inside or outside the nursing home, with the drone guiding them during the walk.  If the person falls or struggles during the walk, the drone asks the patient if they need help. If needed, the drone calls for help.  The drone shares a continuous stream of data such as the user’s location with the patient's caregiver. It also uses anti-collision software to avoid collisions with objects in the surrounding area.

“The approach of using a drone instead of a walking stick will help in training a more upright posture in gait.” (Dr Izumi Kondo of the National Center for Gerontology and Geriatrics (NCGG) in Nagoya, Japan)

A Pepper robot plays a memory game popular in Germany with individual or several elderly people using different difficulty levels. Once the game is over, Pepper uses easy questions to encourage interaction and communication. The caregiver is present at the beginning to connect the robot and the residents, but can also perform other tasks during the game when the seniors interact with the robot on their own. This game not only helps with memory training and word finding but also combats loneliness among the elderly.

“When played in a group, the game is a lot of fun for the elderly and helps them to socialize. Also, Pepper is a totally safe device and does not share any private patient information.” (Dr Rainer Wieching, University of Siegen)

The PADERO project would like to thank all hackathon participants and announce that the third virtual PADERO hackathon will be in spring 2021.