The Limes – a hidden monument 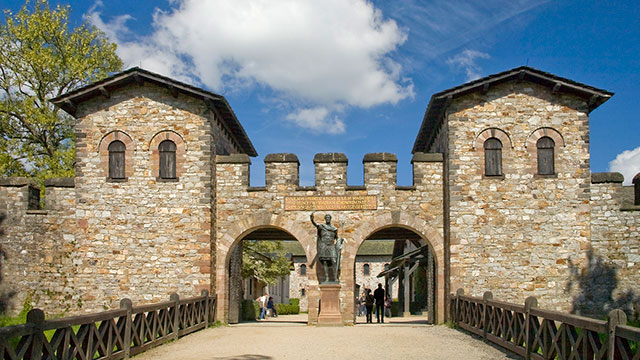 Given the enormous size of the former Roman Empire, it is no surprise that the border fortifications that marked its edges were also extremely extensive. They stretched for over 550 kilometres across the territory of modern Germany alone. This part of the Limes is known as the Upper Germanic-Raetian Limes, named after the two bordering Roman provinces of Raetia and Germania Superior. “Limes” is the Latin word for border path. The Limes formed part of the fortifications with which the former world power demarcated its empire from the independent country of Germania. Around 900 watchtowers and some 120 larger and smaller military camps extended along a line passing through what today is southern Germany. UNESCO included the Upper Germanic-Raetian Limes in its list of World Heritage Sites in 2005, and has also just added the Lower Germanic Limes in 2021, too. It is the largest architectural monument in Germany and, together with Hadrian’s Wall in England and the Antonine Wall in Scotland, comprises the transnational World Heritage Site “Frontiers of the Roman Empire”.

The Limes was a controlled border at which the Romans monitored inward and outward travel, regulating and imposing duties on the transport of goods. The process of fortifying the border began in around 100 AD. During the course of more than a century, it was then continually expanded and rebuilt. In Germania Superior, the border comprised a system of a rampart and ditch, as well as a wooden palisade. In Raetia, the palisade was replaced by a wall. Even by today’s standards, it is impressive what the Romans achieved in constructional terms: “They succeeded even back then in staking off straight sections of the Limes, in some cases over many kilometres”, explains Dr Suzana Matešić, director of the Deutsche Limeskommission (only in German), which is responsible among other things for managing the World Heritage Site.

Wooden legs as gifts of thanks to the gods

Border traffic at the Limes remained intact until the middle of the third century AD. When attacks by Germanic tribes and disputes within the Roman Empire increased, the border fortifications gradually crumbled. In many places the border line can no longer be seen nowadays, a large portion of it being hidden beneath the earth. Nonetheless, numerous watchtower and fort ruins can still be found in the landscape, as can rebuilt military installations. Probably the most famous reconstruction of a Roman military installation on the Upper Germanic-Raetian Limes is Saalburg fort near Bad Homburg.

One of the most important research activities regarding the border fortifications in recent years has been to scientifically analyse and document earlier excavations. Based on these investigations, it has been revealed for example how military installations were designed, expanded and converted. Of particular interest were studies conducted in the Bavarian village of Dambach: excavations here uncovered a layer of piled-up wooden objects, including dozens of wooden legs and arms. The objects were consecrated gifts that the Romans used to ask the water gods – generally nymphs – to cure them or to thank them for their recovery.

What was daily life like in the Roman Empire?

Given the huge dimensions of the World Heritage Site, which covers an area of 250 square kilometres, there is plenty of scope for the kind of research that has been done in Bad Homburg and Dambach. The Deutsche Limeskommission coordinates and funds research projects, organising for example regular scientific colloquia. And every three years the International LIMES Congress is held, attended by several hundred people. Registration for the 2022 congress from 21 to 27 August has just opened.

Thanks to the research that has already been carried out, we now have a clear idea of where camps and watchtowers were located and of the composition of military units, reports Suzana Matešić. “Now we are turning our attention a little bit away from the monument itself to focus instead on life around it, and on questions such as: What was life like for women and children in the settlements along the Limes? How were relations with their neighbours on the other side of the Limes? What evidence is there that the army was multicultural in composition, and how did this influence the life of the soldiers?” To support further research, the Deutsche Limeskommission offers PhD scholarships that are co-funded in each case by the competent state-level agencies for the preservation of historical monuments.

Research into the Limes is also and above all pursued at universities, however: for example at the University of Freiburg, Goethe University Frankfurt, the University of Cologne, Ludwig-Maximilians-Universität München, the University of Bamberg and Osnabrück University (all links available only in German). Despite focusing on all kinds of different areas, the researchers share an interest in obtaining insights from ancient history that are still relevant to us today.

www.dw.com > Borders of the Roman Empire