Regal splendour – the royal palaces and parks of Potsdam and Berlin 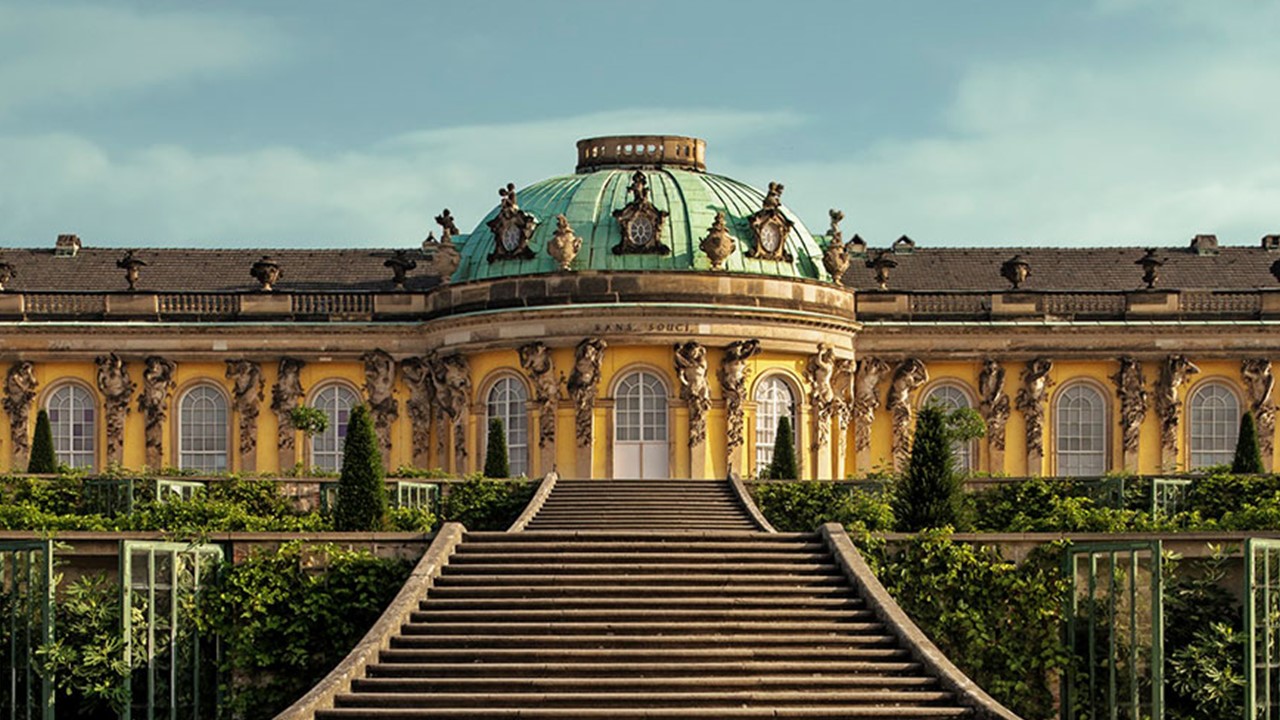 To better understand the world in which the famous Prussian king lived, a visit to Sanssouci Palace is a must. Frederick II’s summer residence was his favourite place and an important sanctuary for him. Here in Potsdam near Berlin, the rooms of the main palace, built in the German rococo style, are still furnished just as they were in the eighteenth century. The Picture Gallery – considered one of Europe’s most splendid eighteenth century buildings designed specifically for a collection of art – is situated on the edge of Sanssouci’s 300 hectare park. It houses nearly 180 works: besides Flemish and Dutch baroque painting, Italian Renaissance and baroque artworks are also represented. In addition, outstanding sculptures can be admired, both from the ancient world and eighteenth century France.

Sanssouci Palace is the oldest part of the ensemble of palaces and parks in Potsdam and Berlin that were included in UNESCO’s list of World Heritage sites in 1992. They were built between 1730 and 1916 by the leading architects and landscape gardeners of the time, such as Carl von Gontard, Carl Gotthard Langhans, Karl Friedrich Schinkel and Peter Joseph Lenné. Besides Sanssouci Palace, buildings listed as World Heritage include Belvedere on Pfingstberg, Rheinsberg House and Schönhausen House.

A preference for France

What makes the ensemble so special is not only the large number of buildings and gardens in Berlin and Brandenburg. It is also important that the collections of art are still to be found in the same places where they were enjoyed in former times. And this allows a number of conclusions to be drawn, explains Dr Jürgen Luh, director of the Research Center Sanssouci (RECS) (only in German). “This reveals his preferences and attitudes to art and philosophy.” One example is the New Palace building, where four huge paintings by French artists are displayed in its largest hall. By contrast, Flemish-German art was only given wall space in a less important room. “This is evidence of Frederick’s preference for France”, says Luh. Some of the paintings in the Picture Gallery also show how “Old Fritz”, as King Frederick II is nicknamed, made fun of religion and the church.

Clothed in pink and silvery green

Frederick’s life and work are an important part of the research done at the RECS, a research institute of the Stiftung Preußische Schlösser und Gärten Berlin-Brandenburg (SPSG). The RECS organises conferences and produces series of publications, details of which can be found on its own website (only in German). In addition, the institute supports young researchers, offering for example voluntary traineeships (only in German) that are advertised internationally. Furthermore, researchers can apply for a RECS fellowship, the next call for applications being in 2022. One of the fellows was the British researcher Dr Adam Storring. In his prize-winning dissertation, he established that Frederick was a competent commander in chief. However, Prussian military ideas of the time were not attributable solely to the king, but were developed by many more actors.

RECS research also offers far-reaching insights into the private life of Frederick the Great – based on the analysis of private invoices, for example. “It has emerged that Frederick was not as thrifty as was always thought”, explains Jürgen Luh. One thing he spent a lot of money on was hair care and grooming, as well as on wigs. The research has also changed our perception of his appearance. “Old Fritz“ always used to be imagined as a man in uniform. From his bills, it is clear that he also liked to wear civilian clothes – sometimes in pink, sometimes in silvery green.

The research questions that are addressed by the SPSG include some highly topical issues. For instance, a congress was recently held that explored how climate change will affect the gardens at Sanssouci. How badly will the trees in the parks suffer from increasingly high temperatures? And how can they be replaced with more heat-resistant species, while at the same time keeping the parks looking as authentic as possible? These were questions that the scientists looked into.

The name of the palace – Sanssouci – translates as “without concerns” or “carefree”. Looking at the trees in the parks, it seems today that what Frederick II was hoping to achieve was more a dream than reality.

www.dw.com > Prussian palaces and parks of Potsdam and Berlin