The Wadden Sea – a place of natural and cultural extremes 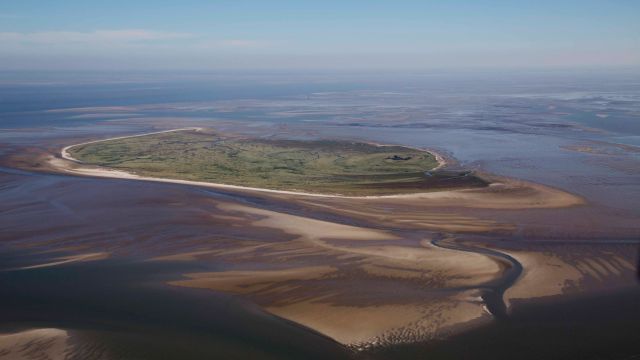 Probably only migratory birds can claim that air travel remained at normal levels last year: as they do every year, millions of them headed north on the East Atlantic flyway from southerly latitudes in spring, only to return the same way in autumn. One of their most important stopovers on this route is the Wadden Sea in the North Sea, where ten to twelve million migratory birds stop to rest and refuel. This is just one of the reasons why the region – which at 11,500 km2 is the size of Kosovo – was included in UNESCO’s list of World Heritage sites.

The Wadden Sea is a flat coastal landscape that is shaped to a large extent by the tides and whose sediments comprise for the most part mudflats and sand. The German-Dutch-Danish Wadden Sea is the world’s largest unbroken system of sand and mudflats. It is of enormous importance for migratory birds, as well as for biodiversity: 100 different species of bristle worm alone are to be found among its more than 10,000 species of plants and animals. Inclusion in the list of UNESCO World Heritage sites was gradual: an initial section of the German and Dutch Wadden Sea was listed in 2009; this was extended in 2011 by the inclusion of the Hamburg Wadden Sea, and in 2014 by the Danish part.

The Wadden Sea is of interest for researchers on a number of levels, for example as an indicator of the current state of the North Sea ecosystem. Germany’s most northerly research institution is to be found in the Wadden Sea: the Wadden Sea Station in List on the island of Sylt. It is run by the Alfred Wegener Institute (AWI), which among the 19 Helmholtz Centres is the one specialising in polar and marine research.

Besides carrying out its own research, the station also provides visiting scientists and universities with the infrastructure they need to pursue their research and teaching. This ranges from classrooms equipped with microscopes to the environmentally friendly research vessel Mya II, which is also used to train the next generation of scientists.

Cultural heritage in the sediment

One major Wadden Sea project came to an end after four years in December 2020: WASA – The Wadden Sea archive of landscape evolution. Concentrating on the Lower Saxony Wadden Sea around the island of Norderney, it built upon previous research findings that had shown that the area covered by the North Sea today was inhabited by humans in prehistoric times. The overall objective of WASA was to reconstruct the postglacial landscape and settlement history, sea level development and climatic variations. To this end, data was obtained using various methods, including drillings and seismic processes. Researchers from the fields of archaeology, sedimentology, geochemistry, paleobiology and coastal engineering were involved.

The research findings have genuine topical relevance, as Professor Felix Bittmann explains. A biologist at the Lower Saxony Institute for Historical Coastal Research (NIhK), he is the project’s coordinator. “Among other things, we wanted to explore whether and where the studied area contains potential settlement areas that fall within the scope of cultural heritage and might potentially be affected by changes in the Wadden Sea, such as the laying of cables.” Alongside the NIhK, participating institutions include the Senckenberg am Meer institute, the Lower Saxony Water Management, Coastal Defence and Nature Conservation Agency (only in German), and the University of Bremen.

Though the process of WASA data acquisition has been completed, the data is still being analysed – also with the goal of preserving the unique natural and cultural domain that is the Wadden Sea.