A treasure trove of primeval finds 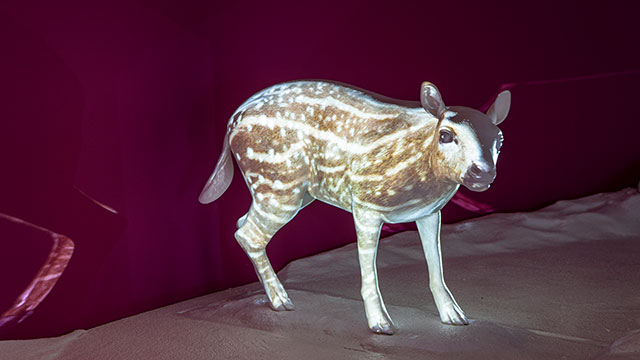 Around 48 million years ago, weeks of violent explosions shook the area around a place in Central Germany that today is called Messel. At the time, a volcanic eruption caused a crater several hundred metres deep to form in the landscape. Over the years, the crater filled with water. The new lake was so deep that no oxygen was able to penetrate down to the lower water levels. Consequently, no animal life was possible there. Merely a few bacteria that could survive without oxygen lived at the bottom of the lake. If a dead animal sank to the bottom, it would remain relatively intact. “This created the ideal conditions for extremely well-preserved fossils to form here”, explains Dr Sonja Wedmann. A biologist, she heads the palaeoentomology section at the Senckenberg – Leibniz Institution for Biodiversity and Earth System Research (SGN), which belongs to the Leibniz Association. The volcanic eruption thus laid the foundation for one of the world’s most important fossil sites: Messel Pit.

Though the first fossil was discovered here as early as 1875, the pit was an open-cast oil shale mine until 1970. Since the early 1990s, the SGN has been responsible for the pit, which has a diameter of roughly one kilometre, part of its remit being to coordinate the excavations. “Ida” was found at Messel, for example; it is thought to be the world’s oldest fully documented fossil of a primate. Ida became world famous because it was initially regarded as the “missing link” – an ancestor shared by both humans and apes. This turned out to be an error, as the 47-million-year-old find was simply too old. Messel Pit also became known for having the world’s largest number of primeval horse fossils, which are closely related to the ancestors of horses today. “Urpferd 2.0” (only in German) – which translates as Primeval Horse 2.0 – is also the name of an exhibition that is celebrating the site’s 25-year anniversary: in 1995 this fossil site was the first German natural monument to be included in the list of UNESCO World Heritage sites. The exhibition continues until 25 April 2021.

Tens of thousands of fossils have been found at the pit in the meantime – from plants complete with blossoms and fruits, to crocodiles, the remains of a bird nearly two metres big, and prosimians. “The very large number of finds makes it possible to reconstruct the ecosystem of the time with great accuracy”, reports Sonja Wedmann. The fact that the finds are often very well preserved is also what makes Messel Pit so unique: the fossils often reveal hair or feathers in great detail. Sometimes even stomach contents are visible, as was the case with a snake discovered by a research colleague of Wedmann: he identified a lizard in the snake’s gastrointestinal tract, plus an insect in the lizard’s stomach. This allows the food chain to be precisely traced.

Sonja Wedmann specialises in researching insect fossils. Her work on finds from Messel Pit allows her time and again to expand our knowledge of the distribution of certain animals. As was the case with her favourite find to date: the fossil of a walking leaf. This insect resembles a leaf, a group that nowadays is found exclusively in Southeast Asia and East Africa. “Only the find in Messel proves that walking leaves used to be distributed differently to today”, explains Wedmann.

Bringing animals back to life with animation

To prepare and examine the finds in situ, the Senckenberg – Leibniz Institution for Biodiversity and Earth System Research has established a research station. A scientist works here together with taxidermists. Other scientists work on Messel-related topics at the Senckenberg Research Institute and Natural History Museum in Frankfurt. Researchers from Germany and abroad also come to Hesse to collaborate with colleagues there. Students also come to do excavation internships, and occasionally doctoral students pay a visit.

Later, the fossils are displayed at the Senckenberg Natural History Museum in Frankfurt (only in German) and at the Hessisches Landesmuseum Darmstadt. At the latter, the 48-million-year-old primeval horse Propalaeotherium voigti. is also on show, which has been reconstructed and animated using the very latest technology and research findings.

Research in the field of palaeontology is also conducted at numerous universities in Germany. At Freie Universität Berlin, for instance, one focus of research is on spores and pollen, whereas Ruhr-Universität Bochum (only in German) specialises in marine micropalaeontology. At Johannes Gutenberg University in Mainz, on the other hand, modern analytical and applied aspects of palaeontology are the focus. For many of the students, Messel Pit is probably one of the most important places to visit in their field.