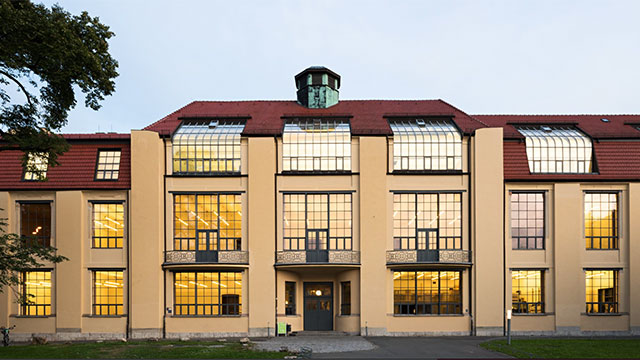 Be it the Wagenfeld lamp or the tubular steel cantilever chair – many designs created by Bauhaus students and teachers are regarded today as classics. Established by the architect Walter Gropius in Weimar over a century ago, the Bauhaus was much more than just a state training institution – it was also an attitude: it was about blurring the boundaries between art and craft and combining art and life.

It was not Gropius who first brought modern design to Weimar, though. The Belgian architect and designer Henry van de Velde was already using unadorned stylistic elements to provide a counterpoint to the splendour of the Wilhelmine period. One of his best-known buildings is the Grand-Ducal Saxon Art School in Weimar, into which the newly founded Bauhaus moved in 1919. Together with the school buildings and the houses and workplaces for Bauhaus masters that were built by Gropius at the later site of Dessau in 1925/1926, it has been listed as UNESCO World Heritage since 1996. Today this is home to the Bauhaus-Universität Weimar.

The Bauhaus is famous worldwide despite having existed for only 14 years. The school, which had already been driven out of Weimar on political grounds in 1925, was closed down at its new Dessau site in 1932 by the National Socialist city council. Subsequently, the Bauhaus withdrew to Berlin as a private institution but shut down voluntarily just a year later – under pressure from the Nazis. Many teachers and students were forced to flee Germany, either because they were being persecuted as Jews or for political reasons. Others went into "internal exile". Some, like the industrial designer Wilhelm Wagenfeld, continued to pursue their professions successfully during the Nazi era.

"Researching the history of the Bauhaus and its members is a challenge", says the art historian Anke Blümm from the Klassik Stiftung Weimar. "Matriculation dates, semester lists and student records are scattered across different locations, partly because the Bauhaus was based at various sites, and partly because Germany was divided after 1945." Since 2013, the documents have been studied within the framework of the "Moving Networks" research project. In 2019, the Bauhaus Community (only in German) online platform made a full list of names and workshops publicly accessible for the first time.

Users can research names, places of birth, roles, dates of death and other information about almost 1,400 people and find out how members of the Bauhaus were interconnected. Working together with media designers, some of the data have already been analysed in the form of "Shortcuts" (only in German). For example, it is possible to browse the Bauhaus contacts of Gropius’ successor Hannes Mayer, who had emigrated to the Soviet Union in 1932.

One of the most interesting findings in the view of project leader Blümm is the mix of students at the Bauhaus, which was far more international than at other art academies of the time. In some years, a quarter to a third of students came from abroad.

More than a third of them did not stay very long, however – these students were enrolled for just one or two semesters. Some only took courses in weaving, while others attended solely the classes given by the artist Paul Klee. Those who stayed longer developed a strong sense of belonging, describes Anke Blümm: "The time that the students and teachers spent at the Bauhaus welded them together." This is clear, she says, from the correspondence that the "Bauhäusler" – as they called themselves – kept up with one another, in some cases all their lives.

The Bauhaus celebrated its 100th anniversary in 2019. Though not everything that the Bauhaus members came up with became popular, no designer to this day can afford not to engage with the ideas of the Bauhaus. For a new generation of designers, the Weißensee Academy of Art Berlin wants to bring the workshop-based art and design teaching of the Bauhaus into the digital industrial age: the workshop will be complemented by a digital space in which to learn about prototyping, and the teaching methods will be adapted in line with didactic principles. The result will be Bauhaus 4.0 (only in German) for the descendants of the "Bauhausians".