Wittenberg – exploring the history of the Reformation 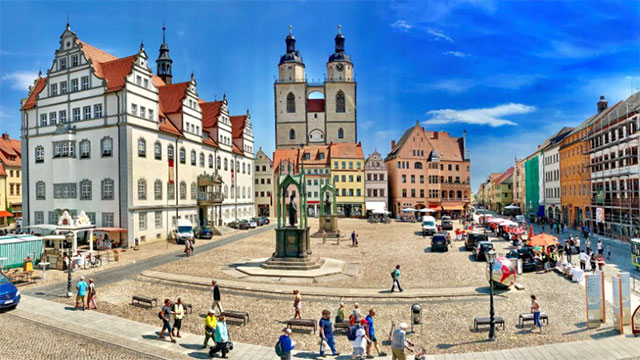 In the view of the great scholar Martin Luther, the citizens of the small town of Wittenberg were living “on the fringes of civilisation”. These were apparently not the only dismissive words that Luther used to describe Wittenberg, which is situated between Berlin und Leipzig. He had moved there in 1508 to study theology. Just a few years later, Luther went down in history for nailing his 95 theses to the door of Castle Church in Wittenberg on 31 October 1517. A doctor of theology, this was his objection to a tradition practised by the late mediaeval church, namely to forgive members of its congregation their sins if they performed enough pious duties or donated money.

What had begun as an academic dispute at Wittenberg University, which was established in 1502 (and today is the Martin Luther University Halle-Wittenberg), became the subject of societal debate when the theses were posted on the church door. Eventually it sparked a movement to reform the Church itself – the Reformation – with the result that Western Christianity split into different denominations. “The early impetus that was set in motion in Wittenberg had an impact across national borders – at the religious, political and social levels”, says Professor Irene Dingel. The theologian and historian is a director at the Leibniz Institute of European History (IEG). The IEG is one of the research institutions in Germany where this impact is being studied. Such research is supported by doctoral scholarships and invitations to international visiting scholars. The next deadline for IEG postdoc fellowships is 15 October 2021, and PhD students can apply by two deadlines each year, 15 February and 15 August. The Martin Luther Prize awarded by the Luther Society (only in German; application deadline in 2021: 30 September:) is specifically targeted at researchers who are investigating Luther’s impact, as well as the reformer’s life and teaching.

Ideas spread around the world

Having experienced its heyday in the sixteenth century, the Renaissance town of Wittenberg today is a somewhat sleepy but very appealing place. The historic sites that commemorate the Reformation, such as Castle Church where Luther preached, and the townhouse in which the reformer Melanchthon lived, are now designated as UNESCO World Heritage. The house where Luther lived, a former monastery, is also on the list. This is where he composed his groundbreaking 95 theses and developed his reformist ideas.

And because the Reformation movement was about spreading ideas, the World Heritage list encompasses not only sites but also texts written by Luther. Together with her colleague Dr Henning P. Jürgens, Irene Dingel was responsible for selecting 14 documents that were included by UNESCO in the year 2015 in its Memory of the World register. “When making our choices, we concentrated on the early phase of the Reformation”, says Dingel. Besides a copy of the 95 theses in Latin, they also include Luther’s Sermon on Indulgences and Grace. In the latter, he explains his ideas to believers on a handful of pages written in German: contrary to what the Church teaches, he wrote, it is not possible to do enough good works to avoid God’s righteous punishment for one’s sins. However, he noted, God is merciful in his dealings with man. “The printers tore the pamphlets out of each other’s hands, with the result that they spread rapidly and far beyond Wittenberg”, explains Dingel.

A bestseller thanks to the printing press

Luther’s sermon became a bestseller within just a few years, which was only possible because the movable-type printing press had just been invented. “Our selection of documents is also intended to illustrate the transition from handwritten manuscript to printed book”, explains Dingel. “This was a revolution in the early 16th century, one that is comparable to the digital revolution in the 20th century.”

All Memory of the World documents are accessible online. Among them is Luther’s Hebrew Bible from 1494, which includes notes made in the margins by Jewish scholars. And of course the Luther Bible is there, too – the “Holy Scripture” that Luther translated into German in a style that was unique at the time.

Impact to the present day

“The transformation processes that were set in motion at the time in Wittenberg were what has made it possible for us to live the lives we do today”, says the Reformation historian Dingel, talking about the importance of commemorating Luther’s writings and monuments. In her view, this includes the way we now take it for granted that authorities can be challenged and that minorities can demand their rights. However, anyone who engages with history will also know how hard-won such emancipation was, and how it has to be battled for anew time and time again.