A new generation of vaccines

The development of new vaccines has become increasingly important worldwide in recent months. Dr Sebastian Ulbert is researching new vaccine technologies at the Fraunhofer Institute for Cell Therapy and Immunology IZI in Leipzig. His latest development is award-winning – and has the potential to revolutionise the production of certain vaccines. 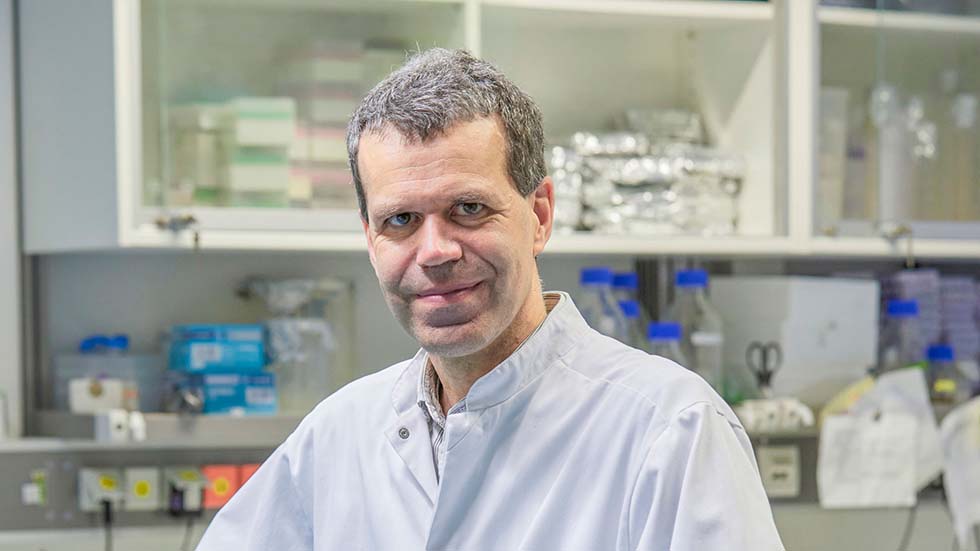 How do pathogens colonise the human body, and how does the body fight back? Dr Sebastian Ulbert was 24 years old and spending a year in Sao Paulo when he found himself confronted by this question time and again – so he decided shortly afterwards to search for some answers.

At the time, he was studying biology at the university of the southern German town of Tübingen and had gone to Brazil to spend a semester abroad in 1996. One focus at the institute of his university in Sao Paulo was on diseases transmitted by mosquitoes, especially malaria and dengue fever. “I was totally fascinated by the interaction between pathogen and host”, recalls Ulbert. “It was soon clear to me that this was the field I wanted to work in – that this was just my thing!”

In 2006, Ulbert began working at the newly founded Fraunhofer Institute for Cell Therapy and Immunology IZI in Leipzig. “Because I started at the institute just after it had been established, I had some influence on the areas of research focus that were defined”, says Ulbert. He became head of the Vaccine Technologies Unit, where research into vaccines against viruses transmitted by mosquitoes is conducted.

As Ulbert was now exploring vaccines in detail, he soon realised that producing inactivated vaccines is not only problematic but to some degree also old-fashioned. For decades it had been standard practice to use mainly chemicals to kill off pathogens – residues of many of these harmful chemicals would often remain in the vaccines. The biologist therefore decided to search for other ways to eliminate the pathogens. Finally, he discovered a method that researchers around the world use all the time to sterilise surfaces in labs: subjecting them to electron beam radiation destroys all bacteria and viruses. “I thought this might also work with vaccines”, says Ulbert. Manufacturing vaccines that are better and have fewer harmful side effects for humans is vital when it comes to global health. And an objective that could hardly be more topical in view of the Covid-19 pandemic and the increasing spread of exotic pathogens.

Ulbert was soon able to put his idea into practice. An important role was played on the one hand by interdisciplinary cooperation – in this context he benefited from the network of the Fraunhofer-Gesellschaft. “We worked together with two other institutes, the Fraunhofer Institute for Organic Electronics, Electron Beam and Plasma Technology FEP and the Fraunhofer Institute for Manufacturing Engineering and Automation IPA. As both have more of an engineering orientation, we were able to get the project up and running quickly”, says the German researcher.

International cooperation was needed, too. Ulbert knew how important this is, not only from his time in Sao Paolo. In 2014 he had headed a European consortium that developed a vaccine against the West Nile virus in collaboration with American and other European scientists. “International cooperation is hugely important as it allows a research project, with all its associated problems and setbacks, to be viewed from many different angles”, explains Ulbert, adding that the solution is very often found by looking at the issue from another perspective.

And this perspective comes about in all kinds of ways, he says. Of course, one role is played by the scientific focus of the various working groups. However, a certain geographical distance can also be helpful, as can different ways of thinking and of analysing and solving problems.

Furthermore, every source of funding and every supporting framework condition facilitates  international cooperation. Projects like InnoHealth, which is in part integrated into the initiative “Research in Germany” initiative, are especially valuable for Ulbert and his colleagues because they link German researchers up with scientists and companies.

Thanks to international cooperation, Ulbert and his colleagues were soon able to demonstrate that electron beam radiation will in future allow certain vaccines to be manufactured not only more quickly but also in a more eco-friendly, efficient and cost-effective manner. Ulbert, together with three colleagues, was awarded the 2021 Fraunhofer Prize for “Human- and Environment-Centered Technology” for his work.

He stresses that Germany has provided him with a good framework in many respects for driving forward his research: the Fraunhofer network, for example, plus European funding, which in its turn offers opportunities for networking and has often served as the basis for further international collaborations.

His next success is already in sight: “One reason why I chose the Fraunhofer Institute in Leipzig is that I can do more research there that will actually be applied in the foreseeable future. And as far as our method of killing pathogens with electron beam radiation is concerned, it is perfectly reasonable to predict that the first vaccine on this basis – at least for animals – will already be on the market in four or five years’ time”, says Ulbert. To ensure that this happens, and that the technology advances in general, he plans to continue his intensive research in this area in the coming years.