Research for a circular economy

The idea behind a circular economy is to keep resources circulating in society for as long as possible. At the University of Freiburg, Hanna Helander, Anran Luo and Machteld Simoens are part of an interdisciplinary and international team that is researching how best to design a circular economy. In this article, the three PhD students talk about their work and what brought them to Germany. 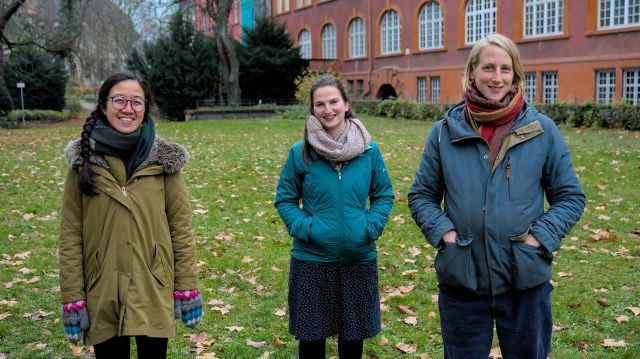 Yoghurt pots, teabags and newspapers are three examples of products that can be recycled and turned into new products. Recycling is standard practice in many countries these days. However, this is not nearly enough any more to overcome challenges such as a growing global population and climate change. Instead, what is needed in the future is a circular economy based on the 3R principle: Reduce, Reuse, Recycle. It has not yet been fully established how such an economy should best be designed. At the Chair of Societal Transition & Circular Economy at the University of Freiburg, Machteld Simoens, Hanna Helander and Anran Luo are exploring different aspects of a circular economy in the Circulus project funded by the Federal Ministry of Education and Research (BMBF). What are the barriers? How is the political debate being conducted? How radically does society need to rethink?

The three researchers are currently working on their doctorates. Despite their different career paths to date, they have a number of things in common that brought them together in southern Germany. In particular, they all started thinking about sustainability at an early age. Machteld Simoens from Belgium for example grew up near Antwerp and went to a Waldorf school. “It is part of the educational philosophy there to become aware of one’s own position in the world as an individual”, she explains. “One of the things I explored in my school projects was how our planet would be affected by a population that was predicted to reach seven billion.” She continued to engage with this question after she left school: she did a degree in Liberal Arts and Science in the Netherlands, her goal being to look at the environment from all possible perspectives.

In Freiburg, she is applying this same multilevel approach to the German packaging industry. “By analysing discourse, I am studying political decision-making processes”, she says. Reusable packaging could be one possible solution to the problem of packaging waste, yet its use has actually declined in recent years. Why has this happened? Where do stakeholders envisage potential ways of overcoming the problem? These are some of the questions she is addressing. “It is not so much about our own opinions; rather we attempt to analyse stakeholders’ perspectives on these topics”, she explains.

Originally from Sweden, Hanna Helander became involved in the circular economy through her activities in the area of social justice. She did an internship in a civil society organisation for small farmers and indigenous peoples in Ecuador and learned a lot about social development work and global inequality. She then studied sociotechnical systems engineering at Uppsala University because this allows one to play a direct part in shaping society. “The programme in Sweden already included social aspects”, she explains. “But I also wanted to take courses in environmental sciences, which is what took me to Freiburg for the first time.” She returned after graduating. Like her two colleagues, what she likes about the University of Freiburg is that there is a focus on interdisciplinary research geared to bioeconomic transformation processes.

“I am studying the interaction between society and nature, using the German food sector as a case study”, she says. “I look at the global supply chains the system is based on.” If the goal is to reduce the consumption of resources, which strategies then offer the greatest potential? The aspect of social justice always plays a part in this. For example, many countries import fruit from regions that have a shortage of water, at the expense of the local population. Further questions involve food waste and the influence that dietary habits have on resource consumption. “Switching to a healthier diet can significantly reduce our overall carbon footprint”, she explains, adding that this has not yet been embraced in global politics.

Anran Luo also follows a global approach in her research. She was born in Beijing and moved to Canada with her family at the age of six. Even as a child she tried to teach her parents how important it is to recycle. At high school she was a member of a group committed to more kinds of recycling at school – this also required considerable political persuasion because the school’s administration knew little about the subject. She later did a degree in International Relations in Vancouver, before spending three years working in the compliance industry in Hong Kong. However, she had the feeling there that this did not necessarily contribute to environmental wellbeing. Finally, she did a Masters in Socio-Ecological Economics and Politics in Vienna.

She is now able to draw on her experiences in Freiburg. “I try to understand what stakeholders in the European Union and in China mean by a circular economy – and what this implies in terms of global environmental policy”, she says. She explains that the EU tends to follow an international approach – waste that is too expensive to recycle in the EU is sold to other countries and can sometimes be reused or recycled there. China views the circular economy more from a national perspective, as saving resources is vital to the country’s economic growth. “However, there are opportunities for collaboration if they can create a common environmental narrative”, she says. This is what she likes about the circular economy – it has so many different levels that everyone can find a way to benefit from it.